The purpose of this and following posts is to discuss risk exposure within Parkour and further explore how we should look at including it as a community. I aim to discuss current "trends" in the community and look toward exploring effective methods to train smarter with regards to risk and safety. Everything we do in life revolves around balance and we need to work with this ideal to find how to most effectively be exposed to it yet remain safe enough to be able to grow, be safe and have ability to continue to do so in life.


Parkour is a training practice to overcome obstacles with movement, moving better for life, function and purpose. Obviously, globally we all train for different reasons based on our experiences and goals, but the majority of practitioners who I believe to have a healthy grasp on Parkour channel to a common focus, working towards the ideals of being useful, being able, ensuring safety and having fun. I'd argue that safety and readiness (being able in X or Y situations) are two of the most important areas of focus for training Parkour.

If you are unsafe or make unsafe choices, you increase risk of error or injury; if you are on the floor hurt, you aren't a very effective mover. As such being unsafe opposes the idea of training Parkour, to move. Safety is subjective but I'll discuss this later on.

As for readiness, the inability to practically execute and apply a skill is equally as concerning, especially in a high-stress, real-life situation. I agree with the ideal we need to train to work and act for the unexpected, the challenging, the real, the "scary", but we need to be smart about how we train that and what that looks like. Our training must be varied and introspective enough to look at our own areas of weakness and build our training types/frequency to acquire those skills/improvements/experience.

As a newer practice we do need to continue to discuss Parkour; challenge what we do and how we do it. We can always improve in training and the practice itself is not exempt from this.

Origins of the Misconception: A big misconception about Parkour is that a large part of the practice is about working at height, doing things over drops etc. Documentaries such as Jump London/Jump Britain/earlier TV interviews shared Parkour at height as a blend between practice exposure, spectacle and art (film). It utilised spaces clearly not designed for people moving across to create spectacle and share levels of competence/ability. As such, the notion of height progressed in the masses because of the reach and focus of the films via mainstream TV and the evolution of YouTube.

The current trend: Rooftop photography, filming:  Early Parkour footage coupled with a lack of understanding/care for the practice alongside comparisons to other traditional sports/activities which often revolve around competition (leading to greater need to show, do bigger, faster etc), has in my opinion, lead to the recent growing culture within Parkour or people linked to it partaking in "roof missions"/ "crane climbing” etc, often seemingly with a primary motivation of filming/photography and exposure via social media. 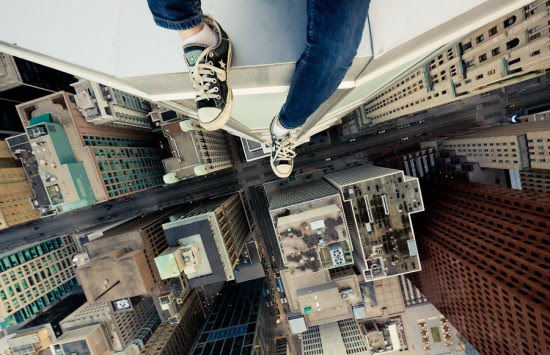 Please note: My concern is always and will always be for the safety of practitioners, current and future, alongside the development of Parkour in the UK. Please read with an open mind and lets think about what we do and why. Since the dissipation of the online forum aspect of the Parkour community, there has been a reduction in exploring and understanding mentality of the practice, the hows, the whys, the reasoning behind our actions.

Alongside the majority of very experienced practitioners I engage with, it is agreed that the recent prevalence of trespassing and high level climbing, being shared via video is concerning for the practice, students and the continued growth of Parkour. I do not and will not condone this practice for several main reasons which I will explore over this and future posts and I'd encourage you to explore this in your own training, choices, or for you to understand and discuss with your son/daughter if you are the parent/guardian of a practitioner.

ANYONE, can grab a camera, climb something, film it, slap it up on YouTube and call it whatever they want. Just because it's labelled with "Free-running" or "Parkour", it doesn't mean it is, so look at everything with a critical eye. Competence does not eliminate risk and does not make you bulletproof. Just because you can, it doesn't mean you have to or should, risk in this area isn't just about YOU damaging YOURSELF but damage to the practice also.

Climbing a ladder and most 'climbing' shared that I've seen as a part of this trend is a very broad basic skill, it is very simple and something which small children do naturally, but are often discouraged from doing. These movements are not and should not be considered categorically, a highly evolved skill and thus carried out by an advanced or skilled individual. Just because something isn't seen often, doesn't immediately mean it is complex or 'special' in terms of an individual's ability. People have jobs that climb daily, tree-fellers, window cleaners for skyscrapers, fire-service etc, whether they've had particular training or not, they are achievable trainable skills, we can all do this with time and practice. Climbing more difficult things is obviously harder and may be a better indicator of skill, however, there are a few things that should be considered as a practitioner of a community.

We live in a society of fear, which is almost as much of an issue to as the carefree and naïve idea that we should climb and do what we can just because we can. The uninformed share the misinformed.Take this example:
1: 2 Metre High, Two-footed jump - Landed quietly, balanced and good posture.


2: 200 Meter High Two-footed jump - Landed without absorbing impact, poor posture etc.
It's fairly obvious that the 'skill' is seen in the smaller, so why the need to do the same at height poorly? For the sake of filming? What kind of message are we sharing?


Some would argue it shows the mental toughness/resilience, confidence in ability to do it in a high stress scenario; to an extent I'd agree with this, but at what cost?

Each of our actions have reactions whether you want to accept it or not.


The masses want spectacle, but I feel as practitioners, we should oppose this viewpoint and reach for more, share a different perspective. We could do things for our own self gain or help people change in their approach and perspective. Bring them into the discussion rather than giving a viewpoint to them, contributing to the evolution of understanding over more of the same.
Doing things for the sake of filming, to replicate, or just to follow another, out of an esoteric notion of "freedom" and "rebellion", is concerning, naïve and will lead to further serious cases which will leave gaps in people's families and friend circles. To get people paying attention to the issues that really matter, I'd argue would be a better, stronger and more worthwhile use of time.

If we as practitioners helped others to learn to appreciate the 'small' movements, the intricacies of movement, valuing mastery and consistency over mass/ or size, society/communities as a whole wouldn't feel the need to take potentially giant risks to validate themselves and their self-worth.

Parkour is as much about changing ourselves as it is helping others (being able and ready). Non-practitioners are overexposed in the “look at me” celebrity culture creating detachment and separation.

Parkour and it's practice is about RECONNECTION, joining us back to movement, back to fundamentals, back to basics, which are so often overlooked and dismissed. I think taking Belle’s approach of “reaching back and help another” is the change we CAN make as practitioners, encouraging others to join and contribute in movement (and Parkour's on-going development) rather than just view the spectacle.

The more people in the loop, understanding what it is we do, the more we can do, the more provision and the greater lives we can leave, partaking in accessible physical activity with a shared understanding. Personally, I will continue to train the small things to better the big picture for myself and for others and at the least I'd love for you to look at your training, your choices and think, what can we do for the better of this amazing discipline.

A similar linked post from our friends at Train-Hard Parkour - http://train-hard.org/2015/03/03/climbing-cranes-and-really-long-ladders/
Posted by Unknown at 13:48